The brewers at Fort George received a new toy for Christmas, and they just couldn’t wait to open it. The custom 6-head mobile bottling line from Meheen was barely out of the crate before they started it up. This had been on their wish list for quite some time. And after well over a year of careful planning and barrel aging, the brewers were anxious to fill some bottles.

Matryoshka, a strong Russian Imperial Stout aged in Four Roses Bourbon barrels, is bottled, wax dipped, and ready to leave Fort George Brewery. The oak barrels filled with stout have been lining the windows in the Lovell Showroom for all of 2016 (historically used as an automotive showroom to display the latest model cars, now used to display future bottled beer releases). 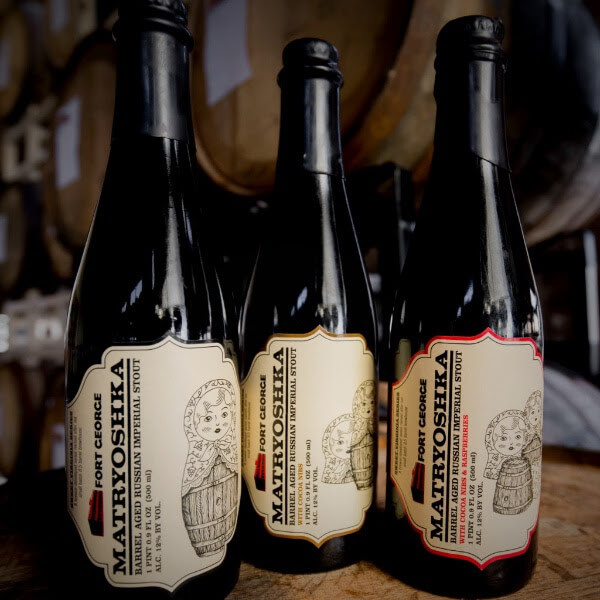 “The name ‘Matryoshka’ is based on the idea of Russian nesting dolls,” explains brewer Dave Coyne. Dave not only manages the barrel program at Fort George, he also drew the illustrations for the labels. “Matryoshka is the first in this series. It will be followed up with smaller and smaller variations. Next is a version with cocoa nibs and finally Matryoshka with cocoa nibs and raspberries.” The first Matryoshka bottles are on sale now in the Lovell Taproom, with the additional layers set for release by February in time for Fort George Stout Month.

The Matryoshka releases are only the first in this new Sweet Virginia Series bottling project at Fort George. The mobile bottling line allows the brewers to do short runs of barrel aged and rare beers on a regular basis. Named after the small “Sweet Virginia” pub system, these brewer-developed beers have always been a source of innovation and experimentation on the block. But with many batches limited to a handful of kegs, most of these beers never leave the pub in Astoria.

“I’m looking forward to trying different styles, perhaps blending with different kinds of barrels,” Dave continues.  “Making the best barrel aged beers we can and having a way to share those with more people, that’s what is exciting to me.”

Due to the limited nature of the Sweet Virginia Series, bottles and draft may be hard to find outside of Fort George Brewery. Expect a new bottle release at the pub about once a month. Occasionally when the project allows, Sweet Virginia Series bottles may be available at bottleshops around the Northwest. Look for future bottle releases, including a 10th Anniversary Barleywine and Bourbon Barrel Cavatica Stout, coming later this year.

It’s the most magnanimous time of the year. Thoughts turn towards the holidays and family gatherings. Communities come together and help one another. At Fort George, it’s time for the Magnanimous Mug Awards—our biggest Benefit Night of the year. Over the last three years, this Fort George program has helped raise more than $200,000. Benevolent…
Read More