Stout Month has been a yearly event in February ever since Fort George opened. A new logo is commissioned each year. Festival of Dark Arts is just one event held during Fort George’s Stout Month. There are stout releases throughout February, stout & food pairings, and even a Traveling Carnival of Stout arriving at tap houses around the Pacific Northwest.

In the beginning, there was darkness…

Fort George Stout Month is a full twenty-eight days dedicated to the darker ales. But the big stout event that gets everyone’s mouth-watering is the Festival of Dark Arts. Voted in 2016 & 2017 as the best Oregon beer festival (Willamette Week OR Beer Awards), this macabre mix of art and stout has grown in popularity and scale every year. And if you look back to its origins, you can see where the event developed its dark theme.

The very first Festival of Dark Arts was held in February 2002, a full five years before Fort George Brewery even existed. At the time, Jack Harris was brewing medal-winning beers as head brewer down at Bill’s Tavern in Cannon Beach. He had created Stout Month in the 1990s while working at McMenamins, and everywhere he moved and everywhere he brewed, he took the stouts with him. Jessica Schleif – Astoria artist and master gardener who oversees the Fort George campus – was working with Astoria Visual Arts (AVA). Jack approached Jessica about setting up an event in downtown Astoria. 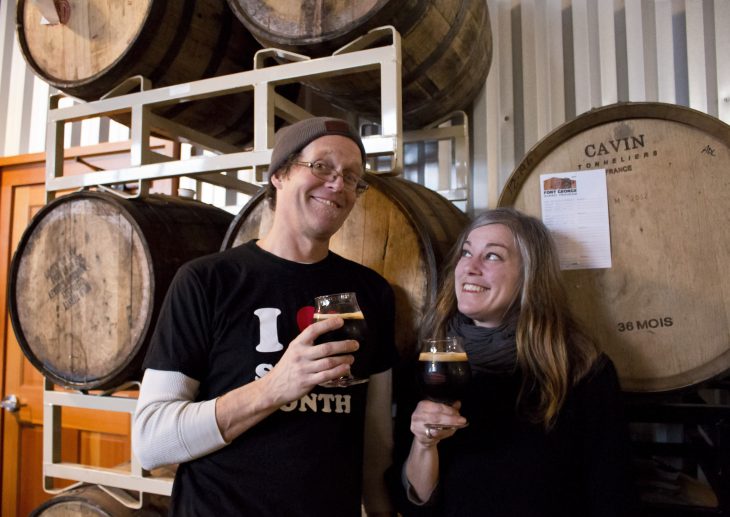 Two of the original organizers of the Festival of Dark Arts, Jack Harris and Jessica Schleif, enjoying a Stout Month beverage.

“Jack had this idea to hold a stout tasting in February,” Jessica remembers. “We talked about making it a fundraiser for local artists and holding the event at the AVA. The thought was to have a stout tasting with all sorts of dark-themed art.  It was a big deal for us. We even got the street closed down for it.”

“Jessica and I came up with the general concept for the festival,” Jack recalls. “I had all of these stouts I wanted to serve. And Jessica and the AVA curated all of the art exhibits and music. With the dark days on the coast in February, and all of the dark beer and dark art, the name Festival of Dark Arts seemed appropriate.”

Jack drove all over the region picking up stouts, and Jessica and the AVA worked on the logistics for the fest. The first Festival of Dark Arts was held in mid-February of 2002. Festival goers could purchase a logo glass for tasting, bearing the familiar raven image designed by Sally Lackaff. Each glass came with a few tasting tickets and some chocolates from Common Grounds Coffee. The beer was all donated to the fundraiser, with 10-12 stouts on tap.

“The first one was DARK,” Jessica describes. “There were lots of people in leather and latex outfits. People were really getting into it, dancing and enjoying the stouts. And Jack brought his friends, the fire dancers, who put on a show once it was dark out.”

“I’d known them for years,” Jack explains. “They all crashed at my house that weekend.”

After skipping a year, the second Festival of Dark Arts was held on the same block in downtown Astoria in 2004. But after that it ran into a few snags. With the gallery space closing and an inability to find a more permanent home, not to mention the tremendous amount of work involved, the festival was shelved. 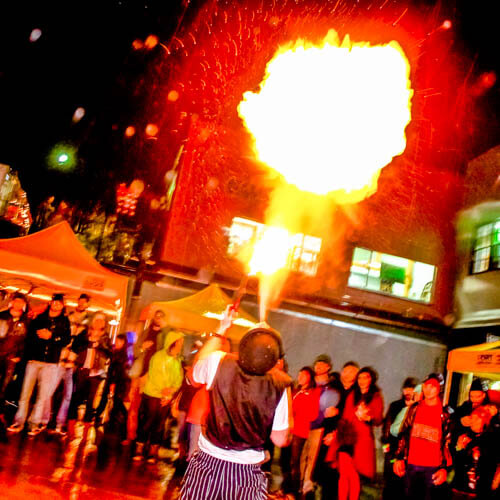 Every year brings new entertainment and craftspeople. The fire dancers have often been a crowd favorite.

Enter Fort George. Opening up on the east end of town in March 2007, co-owner Jack Harris of course brought Stout Month with him. It wasn’t until the brewery expanded in 2010, buying both the Fort George Building and the adjacent Lovell Building, that Jack and Chris Nemlowill (the other co-owner) started discussing the possibility of a festival.

“Chris seemed a little hesitant about the dark theme,” Jessica recalls. “But he liked the idea of a Carnival of Stout with lots of entertainment.”

“It became this spectacle,” Jack adds. “We added iron workers and tarot card readers, live music and a whole brewery filled with dark-themed art. There was a tintype photographer, fire dancers, belly dancers, and a bunch of tattoo artists inking people all day long.”

That first Festival of Dark Arts on the Fort George block was held on the Saturday of President’s Day Weekend in 2012. The event was open to all ages with free admission. Stout drinkers needed to purchase a festival glass ($8) and use tasting tokens ($1 each) to sample the special stout list. All of the festivities took place in the Lovell Brewery and courtyard with attendance estimated somewhere between 300-400. The original poster advertised 15+ Craft Stouts! (although they ended up pouring 20 with another 10 on tap in the public house). 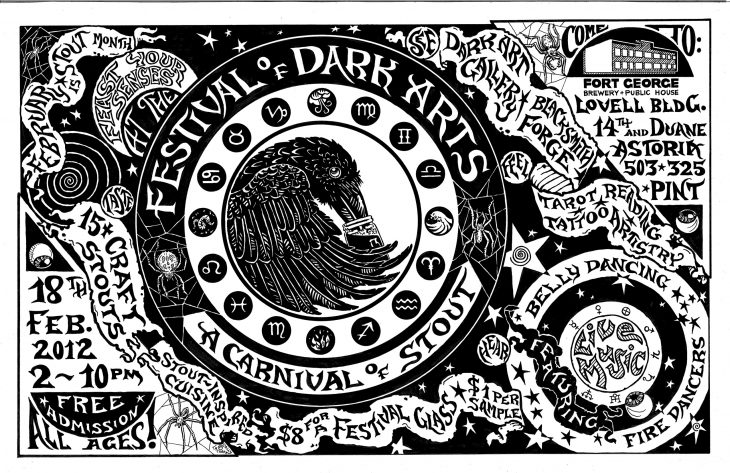 The original poster for the first Festival of Dark Arts at Fort George Brewery, designed by Sally Lackaff. The logo has remained the same since the first event back in 2001.

Each year the Fort George staff tried to outdo that last….with 30 stouts, 40 stouts, 55 stouts on the block. They added more craftspeople, more music, more random roaming entertainment. In 2013 the stout and music expanded into the public house. In 2014, the upstairs space opened up, adding another set of taps to the festival along with a much larger music venue. That year the weather was absolutely gorgeous and attendance reached its peak. The event had always been open to all ages and free to those who just wanted to see the show. But it was obvious that the popularity had outgrown the capacity of the block. 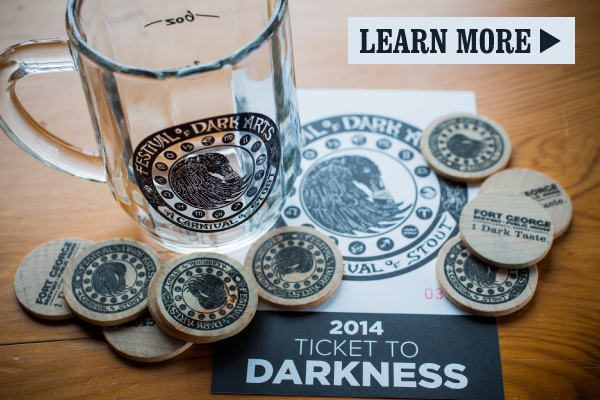 2014 tickets were not required, but if you pre-purchased a ‘Ticket to Darkness’ you could skip the line and collect your glass and ten tokens. Walk-ins were welcome, as long as there were tasting glasses remaining.

In 2015, Fort George capped attendance and mailed out custom, hand addressed cards to ticket purchasers. Minors and non-drinkers were still allowed, with purchase of a non-drinking ticket. This Ticket to Darkness assured the card bearer a festival glass and 10 tasting tokens. Additional tasting tokens are always available at the festival. The festival fell on Valentine’s Day, and the stout love was overflowing.

Starting in 2016, ticket sales moved online through Eventbrite. Attendance was capped, with available ticket numbers actually going down in the last few years. However, the stout and entertainment only got bolder. Every year more craftspeople, more musicians, and more rare stouts are added. This year you can look forward to expanded areas on 14th Street (with an additional 20-tap trailer) and onto the 2nd story deck. PORCUS! returns, along with added food tent options on the block. And, of course, there’s the ever-growing stout list. It’s up to 65 right now, but there are still a few days left. Better prepare yourself for the darkness. 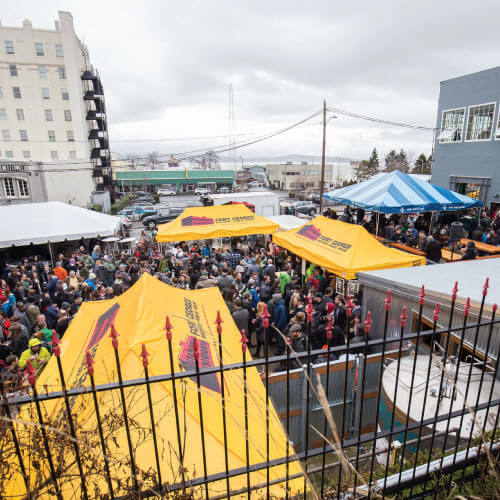 Festival of Dark Arts in 2017. Look forward to a 2nd story deck and expanded space onto 14th Street. Although there is a lot of indoor space, many of the taps, food booths, and craftspeople are in outside areas. Costumes are always encouraged – dress for stout weather.