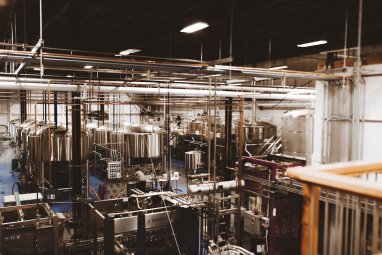 Fort George Brewery has officially shifted its major production to a new waterfront location, along the Columbia River just east of the Astoria-Megler Bridge. The brew system is in place and filling up fermenters. Every weekday at 5 pm the very punctual shift whistle blows from the new warehouse. And the first cans were packaged at the new facility, a pale ale aptly named Beer Number 1. But this transition has also raised questions about the future of the brewery & public house.

“There are no plans to move the Fort George public house, upstairs wood-fired restaurant, or Lovell Taproom,” says Fort George co-founder Chris Nemlowill. And, he adds, with a majority of the beer production moving to the waterfront, there will be even more room for families, visitors, and fun events on the block. 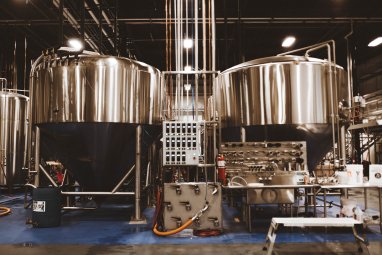 The courtyard at the public house has transformed into a safe and inviting space during this pandemic, open seven days a week with ample room to spread out. Areas inside the Lovell Building that used to hold tanks will now be open to customers. The Fort George Garden and the old Fernhill Glass Shop may also be food and beverage services, at some point. And the brewers will continue to make beer on the pub system and Lovell Brewery system for barrel projects or the pub tap wall. The only thing missing will be the constant flow of trucks in and out of the east end of downtown.

With over 27,000 BBLS per year of beer production, it could get pretty hectic on Duane Street. This was one of the biggest factors in the decision to purchase the waterfront location. Fort George was simply out of space, both at Duane Street and at the Fort George Distribution warehouse in Warrenton. The consolidation of these two entities into one set of buildings will bring about huge efficiencies by reducing time spent transporting materials. The larger space also gives Fort George Brewery a chance to grow and brew a wider range of beers. 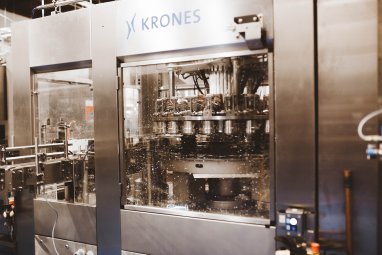 Inside the new facility, Fort George installed a refurbished three-vessel, 60 barrel brewhouse which was used for years by Bridgeport Brewing out of Portland, Oregon. They’ve added two new 250 barrel fermenters, four 170 barrel lagering tanks, and moved almost every tank from the Lovell Brewery. 6,500 sq ft of cold storage has been installed, which will soon become 11,500 sq ft. A state-of-the-art Krones canning line promises speeds of up to 260 cans-per-minute, which is twice the speed of the previous line. There’s even a case box folder & packer, which was previously hand-done by the packaging crew. The larger brewhouse and faster equipment will also allow the brewery to put out a lot more beer without adding numerous night and weekend shifts. 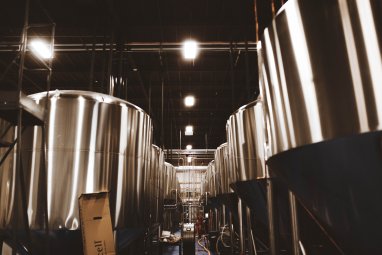 At some point, a tasting area may be added to the waterfront. But right now Fort George is focused on supplying the Pacific Northwest with all of their beer needs, and getting The Fort restaurants fully operational and fully employed.

There’s a long history of canning at this waterfront property. From 1898 to 1980, the Samuel Elmore Cannery was located here. They started out canning salmon and later became the home of Bumble Bee brand tuna. It was the longest continuously-operated salmon cannery in the US. They canned so much fish here that American Can Company actually installed equipment to punch its own cans from rolls of raw tin, right inside Warehouse Number 1 where the brewery is now located. And now, Fort George is bringing canning back to the property. 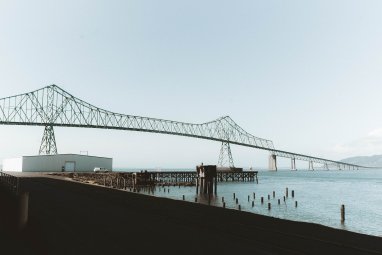 Fort George wants to thank all of the people that helped make this transition possible: Al Jaques (Project Manager), Tim Kennedy (GM), Nathan Crockett, Simo Ranta, Brad Green, Justin Ringle, Domingo Dominguez, Dalton Byrd, Paul Carlisle & Premier Electric, P&L Johnson, Dan Benoit & Along These Lines Fabrication, Marks Design and Metalworks, Ska Fabricating, JP Plumbing, Big River Excavating, Kevin Leahy and CEDR, Scott Edwards Architecture and Dan Supple. Thanks to the whole warehouse crew at Fort George Distribution, tirelessly loading and unloading truck after truck. We also applaud the long hours put in by our Head Brewer Michal Frankowicz and the entire brew staff, who pulled apart and put back together all of those brew tanks from the Lovell Building in about two weeks. And a big thank you to Business Oregon, the State of Oregon Department of Environmental Quality, Craft 3, The City of Astoria, and State Senator Betsy Johnson.