The Goat: According to Norse mythology, Thor rides in a chariot pulled by goats, bringing the thunder. One of the oldest domesticated animals, the legend of the goat runs deep, is vital to humankind, and yet at times turns dark and foreboding. Goats are also amazing mountain climbers, especially holy mountains.

The Elk: Native to the Northwest, some cultures revere the elk as a spiritual force. Large and powerfully built, elk shed their velvet at the start of summer revealing antlers that grow more and more impressive every year. The bugle call of a fully mature bull is remarkably similar to the Fort George 5 o’clock shift change/beer whistle.

The Narwhal: Narwhals absolutely shred it. Anyone who doubts this gets the tusk. 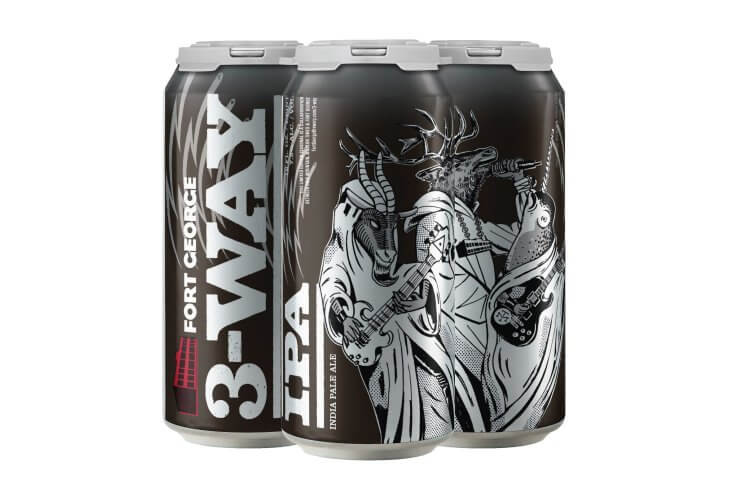 3-Way IPA rises every summer like a Monolith, no a Triolith of IPA reverence, this year featuring Holy Mountain from Seattle, Modern Times from San Diego, and Fort George Brewery from Astoria, Oregon. Each year new friendships are forged. An exchange of brewing knowledge and techniques are passed along. Pints are shared. And by the start of summer, the fruit from this collaborative process is packed into 16-ounce cans, exclusively for the Pacific Northwest.

Enter 3-Way IPA. Among the swelling base and heavily hopped riffs, a uniting dissonance appears. White wheat and flaked oats load in sustained distortion and vast amounts of feedback. From the Juice yeast emerges an ethereal realm of suspended ambient fruit and lupulin resonance. Aromatic and resinous, 3-Way IPA reverberates with massive Simcoe, Citra, Comet, and Ariana additions as The Narwhal holds a ridiculously long chord.

But don’t sleep on this release. 3-Way IPA is a limited summer seasonal. Once the lights fade and the fog settles, there are no encores. Look for 3-Way IPA at Pacific Northwest locations near you starting June 1st. And catch the release parties, with all three collaborating breweries, at the following locations: