Amazing Turnout by the Community

[Astoria, Oregon] On the last Tuesday of every month Fort George Brewery hosts Benefit Night, a fundraising event for local non-profits. But in November that night turns magnanimous.

This year seven noble community members gathered together on Tuesday, November 29th in the upstairs pizzeria to vie for the Magnanimous Mug. The annual award is presented by Fort George to the nominee who can raise the most money for a charity of their choice.

“We were blown away by everyone’s efforts,” said event coordinator Brad Blaser. “This group exceeded every expectation Fort George had, by a lot.”

Participants spent just over two weeks raising funds to bring to the contest. All of the checks and cash were placed into separate growlers on the stage, and the crowds at Fort George continued to add to those vessels all night. At 8pm the tallies were taken and the Magnanimous Mug was raised. This year’s award went to Dulcye Taylor. She amassed over $19,000 for her charity, North Coast Food Web. With Fort George matching that amount, over $38,000 is on the way to local food networks. Other beneficiaries that night included Columbia Senior Diners (Becky Johnson), Clatsop County 4-H (Becky Graham), The Healing Circle (Debbie Twombly), Astoria Visual Arts (Jesse Jones), and Clatsop Animal Assistance (Marcy Dunning & Riki Irie).

All together, the seven nominees and Fort George raised close to $65,000 for the night. And since last year’s Magnanimous Mug Awards, Fort George Benefit Night has helped bring in over $96,000, with 100% of those funds going directly to local non-profits. You can join Fort George and the Wildlife Center of the North Coast at this month’s Benefit Night on Tuesday, December 27th. 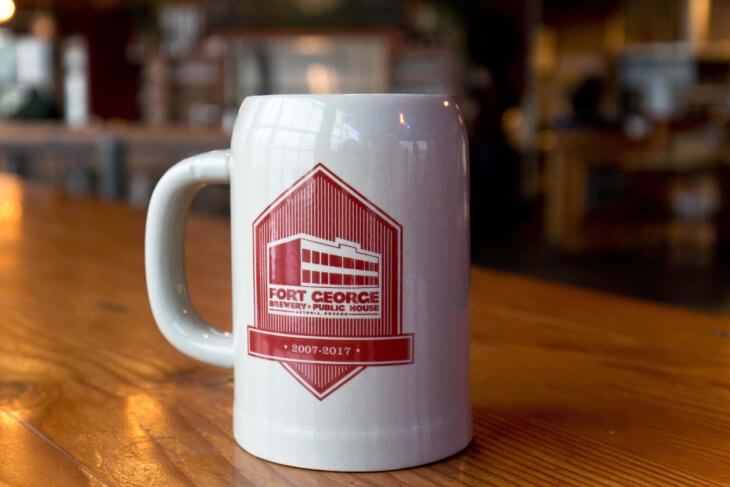