Preparations for a 3-Way IPA can be intricate, as you may imagine. Where do you begin? How does one approach a 3-Way IPA with a collaborator? With all of the amazing brewers out there, how do you choose? Well, it turns out the first step is to invite them out to dinner.

This year’s collaboration began back in January at the Fort George Indian & IPA Brewer’s Dinner. Manny Chao arrived from Seattle with a keg of Eddie IPL, and Josh Pfriem brought along a Double IPA from Hood River. Jack Harris and Chris Nemlowill (and Beta IPA and Vortex) filled out the table. After five courses of spicy food and hoppy ales, a leisurely tour around Astoria’s nighttime establishments, and a few awkward late night photos in front of “The Pig,” everyone retired for the night in their respective rooms.

The following day – bright and early at 11 am sharp – the recipe meeting commenced behind closed doors in the Lovell Taproom. 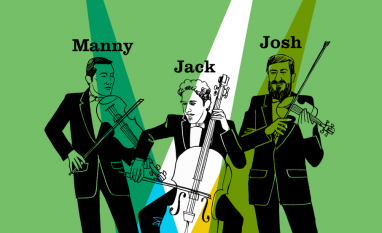 Jack: I really like the way you guys make your IPAs.

Manny: Thanks Jack. So, do we shoot for something different, or keep it something West Coast?

Jack: We can make anything you guys want, as long as it’s an IPA.

Potential hop varieties, packed into 8-oz Mason jars, circulated around the table. Aromas were analyzed, ideas were bandied about, and samples were sampled.

“And bright!” Josh added, diving into the specifics of the hop additions – amounts, times, and temperatures. “A little bit of Citra makes Equinox pop,” he explained.

“Landing in that sweet spot, right around five and a half percent,” Manny continued.

“A 5.7% ABV beer with over four pounds per barrel…you’re going to get a LOT of hops,” Jack noted. 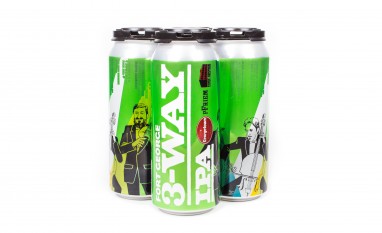 From the moment you pop the can, hop aroma hits you right in the nose. Fruit forward, with a crescendo of tropical and citrus flavors – 3-Way IPA presents an ensemble of Simcoe, Meridian, Citra, and Equinox hops. Enjoy a lustrous and lively play across the palate.

Fort George’s 3-Way IPA is a collaboration of craft, a chance to exchange ideas and knowledge with brewers who are doing fantastic things with IPAs. Every summer features a new collaboration, a different recipe, and a unique 16-oz can design, but with the same 3-Way IPA name.

Come hang out and grab a pint of 3-Way IPA, along with several other IPAs from Fort George, Georgetown, and Pfriem. The 3-Way IPA Tour is coming to a Pacific Northwest city near you.

A Seattle craft brewery focused on doing one thing right… draft beer. Started by Roger Bialous and Manny Chao… a couple of beer loving local boys who brewed up a pretty darn tasty beer in the garage (actually it was the back deck, but garage sounded better). Sorry, no brewpub, but they do have a retail shop where you can pick up kegs to go, growlers, and perhaps get a taste of their newest beer before it’s released. Or you could be social and get out to your favorite local watering hole. If Georgetown beer is not on tap, let them know and they’ll do their best to pester ’em into submission.

The goals for the brewery were modest: to build a business that was tightly integrated with their family lives, to honor the place they call home, and to create a warm, friendly space where others could experience the creations. The goals for the creations themselves are anything but modest.

Pfriem artisanal beers are symphonies of flavor and balance, influenced by the great brewers of Belgium, but unmistakably true to their homegrown roots in the Pacific Northwest. Although they are served humbly, each glass is overflowing with pride and a relentless aspiration to brew the best beer in the world.

Locally owned and operated in historic downtown Astoria, Oregon, Fort George crafts original beers available only in the Pacific Northwest. Whether in cans or kegs, at the pub or on your front porch, Fort George beer brings people together in aromatic headiness and lupulin ecstasy. For more information about Fort George, go to www.fortgeorgebrewery.com or follow them on Twitter, Instagram, and Snapchat @FortGeorgeBeer.

3-Way IPA is available in 16-oz four-packs and draft starting May 22nd. Fort George beer is distributed only in the Pacific Northwest.